PETMAN is an adult-sized humanoid robot developed by Boston Dynamics. It's stunning. The humanoid, which will certainly be compared to the Terminator Series 800 model, can perform various movements and maintain its balance much like a real person.
Boston Dynamics is building PETMAN, short for Protection Ensemble Test Mannequin, for the U.S. Army, which plans to use the robot to test chemical suits and other protective gear used by troops. It has to be capable of moving just like a soldier -- walking, running, bending, reaching, army crawling -- to test the suit's durability in a full range of motion.
Marc Raibert, the founder and president of Boston Dynamics, tells me that the biggest challenge was to engineer the robot, which uses a hydraulic actuation system, to have the approximate size of a person. "There was a great deal of mechanical design we had to do to get everything to fit," he says.
PETMAN was one of the robots that most impressed attendees of the IEEE International Conference on Intelligent Robots and Systems in San Francisco last month. At the event, Raibert showed a video that made the audience gasp. Unfortunately the clip wasn't ready for public release and we couldn't post it here. Now it's out:
Led by Dr. Robert Playter, Boston Dynamics' VP of engineering, development of PETMAN got its start with a $26.3 million Army program. Two years ago, the company, based in Waltham, Mass., first demonstrated PETMAN's legs by putting them to walk on a treadmill. This year, the company showed that the robot legs can run at up to 7 kilometers per hour (about 4.4 miles per hour) and announced it had completed a prototype of the body.
Raibert says the humanoid and its behavior are still under development. "We plan to deliver the robot to the Army next year."
According to the Army requirements, the robot has to have about the same weight and dimensions of a 50th percentile male (the size of a standard crash-test dummy), or a mass of 80 kilograms (about 180 pounds) and height of about 1.75 meters (nearly 6 feet). PETMAN also has to simulate respiration, sweating, and changes in skin temperature based on the amount of physical exertion. Boston Dynamics used motion-capture systems to study the movements of humans as they performed a variety of exercises.
The robot relies on a tether that provides hydraulic power, but its body had to share space with many sensors and other components. Cramming everything together became a big engineering puzzle. And not only the legs had to be strong, Raibert explains, but the upper body too, to allow the robot to crawl and stand up.
There are all sorts of things robots like PETMAN could be used for. Any place that has been designed for human access, mobility, or manipulation skills. Places like the Fukushima reactors could be accessed by PETMAN-like robots (or AlphaDogs), without requiring any human exposure to hazardous materials. Perhaps firefighting inside of buildings or facilities designed for human access, like on board ships designed for human crews. 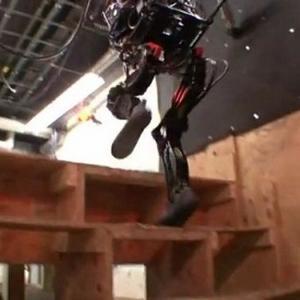 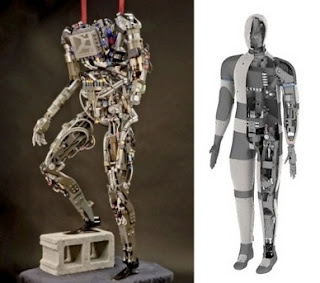